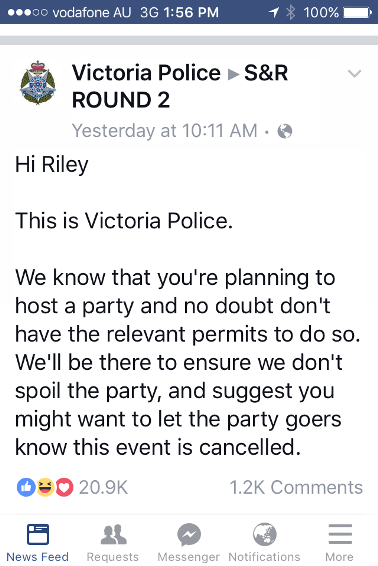 New cops on the beat

Last Friday I got a call from a very agitated father who said he needed help with a Bayswater ‘event’. My alarm bells rang. I asked if it was the ‘Round 2’ party that police (and the father) had cancelled but which Facebook ‘guests’ were determined to attend anyway.

It was. I told the father I’d be at his home ASAP to discuss.

I arrived to see police door knocking frightened residents, suggesting they move their cars to safety in preparation for the following night. While this seemed an outrageous waste of police time, I realised they were powerless to prevent crowds from turning up. So I met with the stressed father and his wife – for whom I felt great sympathy.
Then I met their son.

He’d been hanging around with a bad crowd for months. Now an argumentative teen who defied all authority, he refused to remove this event from Facebook as his new ‘friends’ were the ‘hosts’. This, despite his father being 100% against the event and beside himself with fear for his property and family.

I told the father I’d protect his home if I could get guaranteed adult helpers plus police support.

I worded up the police, who were very helpful. We agreed it was madness that neither they, the parents nor even Facebook could take down the dangerous online invitation of one defiant teen. On the night of the event, I assigned three of my crowd control staff, who joined forces with a number of parents. We were ready. But then we heard the son had left the home and that the party had been reposted by another host to Ringwood!
As a result, our night was a complete anticlimax. A few kids and media came past to see if anything was happening but we had no issues.

Meanwhile, I could see the action was clearly in Ringwood – from the police helicopter hovering over that area. From my law enforcement career, I estimate this fracas would have drawn around 20 ground units to support the Air Wing. Tens of thousands of your dollars and mine down the toilet. Back home, the boy’s father had to inconvenience his entire neighbourhood and pay for a security fence and staff – for nothing. As this story proves that authorities are powerless to stop these events, I plan to make a fresh submission with regard to Safe Event Laws for Teenage Parties.